A Japanese tradition is making waves in the Magic City.

When The cave Opened in Miami Beach at the end of 2018, it was only the second omakase-style sushi to find its way into the neighborhood. “The Den became a target,” says Mahmood Abousalem, East Coast Regional Director of Plan Do See America, Inc., the hospitality brand behind the hidden sushi bar. “Restaurateurs came in and saw it and thought, ‘Miami needs more omakase counters’.”

It was then that the city – more often associated with celebrity chefs and well-known brands associated with luxury hotels – began a shift towards refined sushi, served in a different, more traditional and much more consciously presented way. And it only made sense: tasting menus in general were on the rise across Miami, so omakase seemed a natural evolution.

The cave | Photo by Anthony Nader

Omakase can be translated as “I leave it to you” or “I trust you, Chef,” so named as the chef tailors the experience for the guest and watches the guests’ reactions and expressions as they set up each small dish on the counter in front of them. The multi-course experience unfolds as beautifully as a symphony, with each bite-sized dish being perfectly polished and plated, dramatically presented by the chef who stages the show behind the sushi counter. The pandemic has disrupted this type of eating as eating is an intimate face-to-face encounter and requires a level of human interaction that has since been replaced by QR codes and roadside pickup. But last year, as restaurants slowly rolled out their reopening strategies, the demand for omakase has been so great that it seems like new eateries are popping up almost every month. 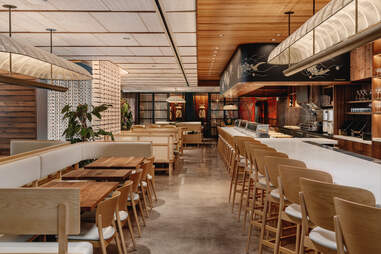 Case in point: Austin Transplant and James Beard Award Winner Uchi, which debuted in January, was one of the most hyped restaurant openings of the year. For founder and chef Tyson Cole, Miami seemed like an ideal landing spot for the brand and the best of the big metropolises (NYC, LA, etc.) to begin expansion. He spent a year or two looking around town before closing a location in Wynwood because it’s near downtown but not right in it. “Wynwood’s vibe is so creative and a great fit with what we’re doing,” he says, adding that the timing also made sense for the restaurant’s reveal. “Right now, things are coming back from the pandemic quickly and people are trying new things.”

In late 2020, Wynwood also welcomed Hiyakawawhich has (rightly) become an architectural favorite on Instagram. Restaurateur and art dealer Alvaro Perez Miranda spent 15 years in Japan, combining his Venezuelan roots with his travels in Asia to create a new breed of Latin American fusion, kissed with Japanese cuisine and accented by Venezuelan aesthetics. “I wanted the ceiling to be a work of art and do something theatrical because you can see it from the outside,” says Miranda, referring to the 700-part, wave-shaped installation made of wood that hovers over the dining room.

Miranda also wanted to pay tribute to the exquisite precision found throughout Japanese culinary culture. Ingredients like $ 80 mangoes and seasonal seafood are flown in daily, and instead of dipping sushi in soy sauce, chefs use small brushes to expertly paint sashimi and nigiri. “In Japanese it says omotenashi, The attention to detail you put in what you do makes all the difference, ”he says. “I wanted to open a restaurant where you can eat omakase as if you were in Ginza, but we save you the plane ticket and the hotel.” 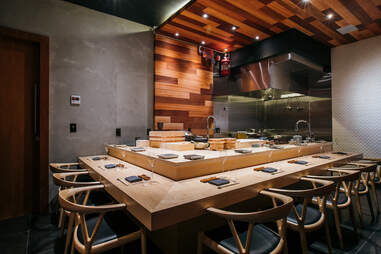 Whisper bar Hide helped introduce this concept to Wynwood when it opened three years ago. “We have been traveling to Japan for a long time and thought this type of omakase would be a nice addition to Miami,” said Julian Hakim, President of Showa hospitality, the group behind Hiden. “It was kind of risky because it was definitely the most expensive in Wynwood at the time.”

The high price is due to the sourcing of the ingredients and the caliber of the chefs, not the atmosphere or decor that so often gives Miami its reputation (in other words, you won’t find a bottle service). and gilded sculptures here). “You don’t go to flashy restaurants in Japan,” says Hakim. “You want to keep the design as functional and simple as possible so that you can concentrate on the dishes.”

Hidden behind a back door in the Taco Stand, Showa’s laid-back taco spot, the sushi counter only seats eight, which makes it feel even more like a private dining experience. Rice is freshly prepared for each seat and served at different temperatures depending on the dish, while hot plates are prepared behind the counter in the compact kitchen. “Since we have so few customers, we can really concentrate on the attention to detail,” says Hakim. “We just want to get great things and let people go happy. It is not easy to repeat the experience – every plate and every dish was selected by hand. “

Whether you have the money to indulge in a sumptuous meal or are still hooking into this quirky Japanese concept, these are the Omakase OGs, spin-offs, and speakeasies that are driving the movement and doing their part to make Miami in to transform a Tokyo on the beach. 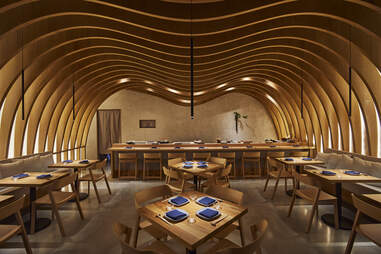 Wynwood
Hiyakawa is the Venezuelan-born restaurateur’s newest hotel behind the popular Wabi Sabi Japanese restaurant, pointing to Tokyo’s stylish Ginza district. Seasonal products and seafood are flown in fresh daily from Japan and reservations are possible for only 12 people per day. Polished concrete floors and a floor-to-ceiling wooden art installation frame the 14-seater counter, behind which Morimoto alum Masayuki Komatsu serves grilled, steamed, and deep-fried dishes on plates by a New York-based Japanese ceramist. Seasonal specialties like Japanese horse mackerel and wild yellowtail make this place really shine, and the sake sommelier can guide you to the perfect pairing.
How to book: Make a reservation through Tock. 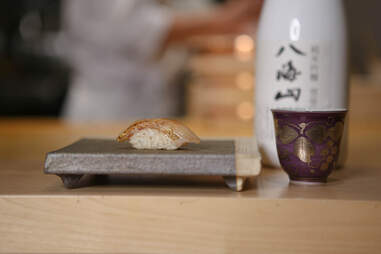 Wynwood
From the group behind Mexico City’s bustling Japanese dining scene, Hiden holds court in one of the least-expected places: behind The taco stand. And in true speakeasy style, the only way to get into the 8-seater Omakase is with a password that was emailed earlier that day. Walking through the chaos of the taqueria into the quiet 450-square-meter eatery can be a bit upsetting, but once the tasting begins and the chefs begin carefully preparing and plating each of the eight to ten courses, you immediately feel like Tokyo offset (where the fish is of course flown in fresh every day).
How to book: Make a reservation through Tock. 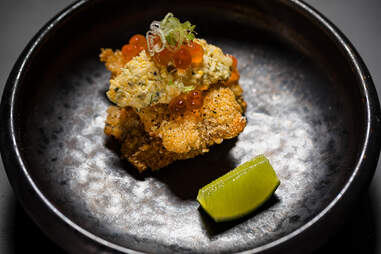 Downtown
Just before the pandemic broke out, the duo behind it 1-800-Luckys Poke OG brought the fast-casual poke bowl concept to a stand-alone location in downtown – a part of the city that has practically no Asian cuisine. Now they have expanded the space next door to create an affordable Omakase experience in collaboration with sushi chef Ryo Kato, formerly of Myumi (who also had a sushi counter in Asian Food Hall 1-800-Lucky). The only traditional aspect of the space is the sushi counter, which seats just eight, while the old-school, hip-hop-dominated soundtrack and cabinet of curiosities full of Japanese Monopoly and action figures are more in keeping with the colorful bars you’d find in Wynwood. But that’s part of what makes this place seem more accessible to Omakase newbies – or those who want to be pampered without losing half a month’s rent in the process. Choose the uncomplicated 10-course menu or treat yourself to an 18-course granny cheese sprinkled with coveted dishes such as Uni, Chu Toro and A5 Wagyu.
How to book: Make a reservation through Tock. 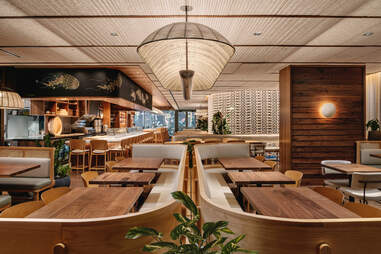 Wynwood
After almost 18 years in the business, fans are still making the pilgrimage to Austin to dine with the original Uchi in the converted bungalow. And at this Miami outpost, connoisseurs can pick up on some of the elements of the original, including the enthusiastic happy hour (a great way to sample the Uchi experience without diving headlong into an expensive tasting menu). And while the planted outdoor patio is a Miami version of Chef Tyson Cole’s laid-back Omakase concept, the rightly hyped restaurant with its 14-seat walnut sushi counter at the center definitely exudes a chic feel. Every dish has an unexpected twist, be it a yuca crisp or bigeye tuna with goat cheese, which is why the chef’s 10-course tasting is the best way to control the bill and try both seasonal and signature dishes.
How to book: Make reservations through OpenTable.

Lane Nieset is a contributor for Thrillist.