The Eater’s Guide to Miami’s Best Food and Drink

While Miami’s restaurant scene looks much different these days due to the impact the novel coronavirus pandemic over the past year and a half, the Magic City’s resilience and its culinary scene have continued to shine.

Now restaurants are back to focusing on flavor, with locals stepping up their game and pouring their diverse backgrounds into the meals they prepare. Use this guide to find the places that matter the most in Miami.

It’s hard to deny the Latin American and Caribbean influences found throughout the city. Cuban flavors reign supreme, but influences from all over are making their presences known in the best of ways. Think delicacies from everywhere from South America to the islands of Haiti and Puerto Rico. The flavor combinations are as refreshing and as vibrant as the city itself.

For a quick Miami culinary snapshot, don’t miss the stone crabs (and sides) at Joe’s Stone Crab, a frita at El Rey de las Fritas, any of the breads or baked goods at Zak the Baker, croquetas from Islas Canarias, and a milkshake from Robert is Here.

There is a cornucopia of maps on Eater Miami, detailing everywhere to eat and drink in the Magic City. Below are the top destinations on the site’s most popular maps to help time-starved eaters prioritize which spots to visit.

Hot Restaurant: It’s been an out of town invasion over the past few months, with some of the hottest newcomers being offshoots of incredibly popular restaurants in other cities. There is no denying the NYC import Carbone is the hardest reservation to score, alongside another Big Apple favorite, Korean steakhouse Cote, and Austin sushi legend Uchi. For a full breakdown of Miami’s hottest restaurants, updated monthly, check out the Eater Miami Heatmap.

Essential Restaurant: No restaurant on the Eater 38 will disappoint, but when trying to narrow the list, some suggestions: the tasting menu at Stubborn Seed, created by a Top Chef winner, is an experience that shouldn’t be missed. Or stop by for a meal at Boia De, tucked away in an unassuming strip mall, it is serving up some of the most creative dishes in the Magic City.

Bar: Miami’s nightlife is known worldwide for a reason. Mainstays like the Broken Shaker and Sweet Liberty are still worth a visit, while quirky Downtown Miami newcomer Over Under also serves up some well crafted cocktails and hearty bites to soak them all up with. Late night hotspots like The Corner, Mama Tried, and Swizzle are back up and running until 5 a.m. or later most evenings, serving solid cocktails with a side of debauchery. Check out all the essential bars in Miami here.

Brunch: Miami’s all about the brunch life. For something laidback, Blue Collar’s weekend brunch offers well-priced hearty classics, while Threefold Cafe features sweet and simple Aussie influenced fare that locals love. Looking for a more luxe experience? Brickell’s chic Chinese import, Hutong Miami, offers a high-end dim sum brunch with free-flowing cocktails to boot. For the best brunch newcomers in the city, and there are always a lot, check out the brunch heatmap here.

Iconic: Miami embraces nostalgia, and the city’s most iconic dishes are iconic for a reason. Longstanding classics are still some of the best places in the city fish sandwich pros La Camaronera, old school Cuban diner Rio Cristal, and barbecue staple, Shorty’s.

Waterfront: Let’s face it: Miami’s got some killer views and plenty of restaurants in this city have them as well. Smith & Wollensky, Michael Schwartz’s Amara at Paraiso, and Rusty Pelican have most beat.

Pizza: Stanzione 87 and Lucali are the standouts on the pizza map. For a quick bite with a lot of flavor, Casola’s, Frankie’s and Steve’s Pizza serve up delicious, classic pies that will satisfy any pizza craving.

Miami’s so much more than the beach nowadays. And while the beach is still worth a culinary visit, neighborhoods off the beach and into the mainland having been booming with delicious activity.

This unique artsy neighborhood is on everyone’s radar. While exploring the graffiti-filled walls grab a freshly made pastry at Zak the Baker, a cup of coffee at the original Panther Coffee, a Cuban sandwich at Enriqueta’s Sandwich Shop, a slice of pie at Fireman Derek’s or a doughnut at The Salty. Asian-influenced cuisine is now dominating the neighborhood with options for pristine sushi from Uchi, Hiden, or Hiyakawa; ramen from Iron Chef Morimoto’s Momosan; a variety of fare from the Wynwood’s Asian-inspired food hall, 1-800-LUCKY or outdoor food hall and entertainment spot Oasis; or opt for a meal longtime favorite KYU, serving up its unique take on barbecue. Keep up with the most exciting new restaurants in the neighborhood with this map.

After falling prey to the tourism gods in the 2000s, Miami Beach has pockets of new areas that were created with both locals and tourists alike. Sunset Harbour started the locals-friendly trend thanks to the team with Spanish tapas eatery Barceloneta and sushi mash-up Pubbelly Sushi. Around the corner is NYC import Lucali, whose Miami pies are just as good as its Big Apple counterpart’s, while hot spot NaiYaRa turns out high-end Thai street food fare with a side of celebrity sightings. Sunset Harbour also serves as a breakfast hub as well with True Loaf Bakery, Panther Coffee and Icebox Cafe, featuring Oprah loved cakes, all solid choices in the neighborhood.

Yes, there are tourist traps aplenty in the neighborhood that started it all. Do yourself a favor and avoid eateries on Ocean Drive, which will charge about double for mediocre food and sugary drinks. Instead, locally-owned and operated restaurants are the way to go. For a quick bite sandwich masters La Sandwicherie won’t disappoint and stay open well into the night. For a sit-down experience check out pasta kings Macchialina, chic Greek eatery Milos, much buzzed about Carbone, or opt for a cocktail and Mexican fare at Serena’s rooftop patio. If wandering South of Fifth and wary of the wait at Joe’s Stone Crab, laid-back ceviche shack My Ceviche will satisfy a craving for stone crabs and ceviche. Find all of the top picks in South Beach here.

This is probably Miami’s fastest growing culinary neighborhood. For years, the area was overrun with chain restaurants, but the tides have turned with plenty of local restauranteurs popping up all over the ‘hood. Local favorites include Glass & Vine, modern-American with a Latin twist spot Ariete, and Michael Schwartz’s Harry’s Pizzeria. But plenty of tried-and-true staples remain like brunch go-to Greenstreet Café, intimate French brasserie Le Bouchon du Grove and perfect lunch spot Jaguar Ceviche. If in a rush, go for the al pastor tacos at El Taquito or the red curry at Asian Thai Kitchen, which is hidden inside a local Kwik Stop. And don’t forget to grab a waterfront drink at Monty’s equipped with awesome marina views. You can find a comprehensive guide here.

This is the epicenter of Cuban cuisine in Miami, and where a lot of Miami-adopted specialties can be found. The most famous Cuban eatery is Versailles, with a Cuban sandwich that is still one of the best in town, but if in the market for a more modern take on the classic sandwich, then make a stop at Sanguich de Miami. It’s easy to spend a day eating and drinking a path through the area. Start with a frita at El Rey, then grab some tongue tacos at Viva Mexico, and finish on a sweet note at Azucar Ice Cream with a cup of its famous Abuela Maria ice cream. Then end it all with a night cap at “hidden” cocktail bar housed on top of Taquerias el Mexicano, Los Altos. Check out the comprehensive guide here.

In the land of banks and steakhouses, there are still plenty of unique meals to be had. For those enjoying an expense account dinner, perpetual sushi hot spot Zuma, Peruvian mecca La Mar, and modern-day steak house Edge Steak & Bar will impress the bosses, while LPM with its chic Mediterranean flare is perfect for date night. For a more low-key option, get a well-made espresso drink at All Day, tacos at Taqueria Hoja, or the gazpacho at modern Spanish eatery NIU. Finish the day off with a drink at popular rooftop hangout Sugar, or one of the area’s watering holes like American Southwest-influenced drinking den Lost Boy or stop by the ode to the classic neighborhood spot Tobacco Road. For a comprehensive guide to dining in Downtown Miami visit here and for your guide on Brickell dining visit here. 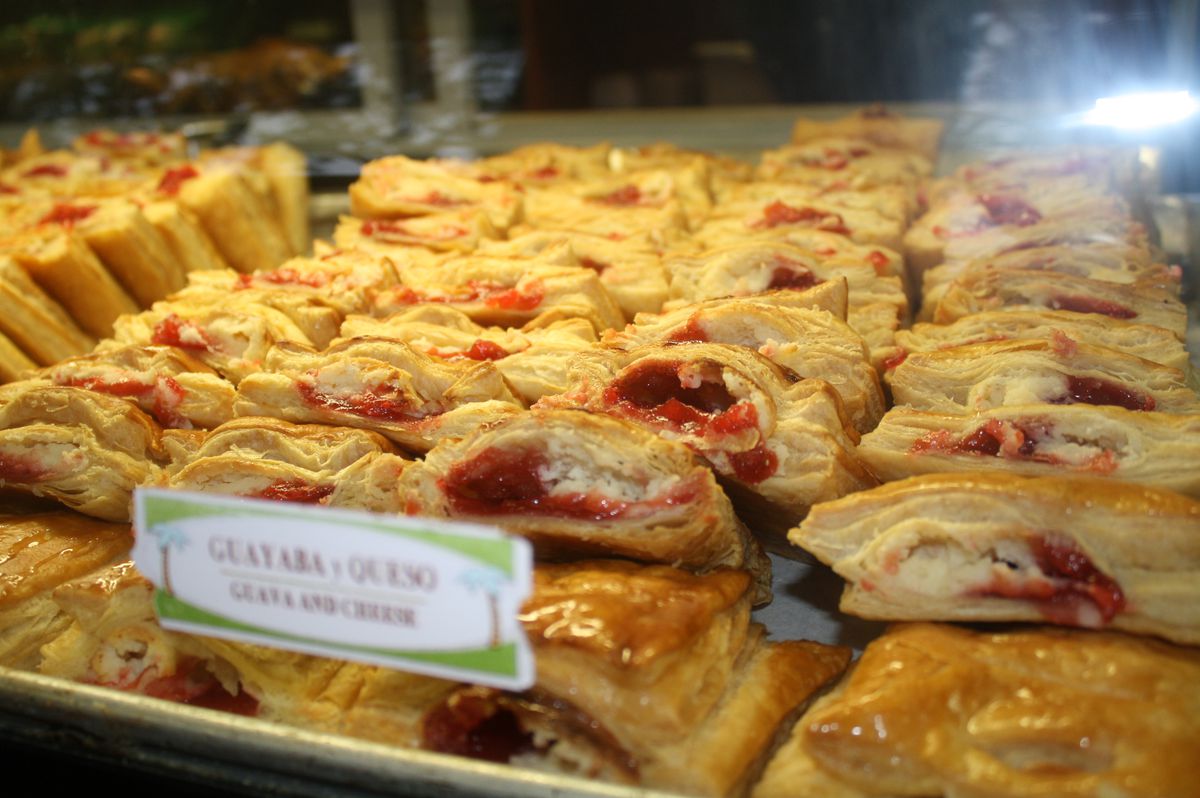 A Cuban-style burger made with a thin, very seasoned pork and beef patty, topped with shoestring potatoes, diced onions and ketchup and nestled inside a Cuban roll. Debates rage on where to find them but these are your five best bets.

While the term is used liberally nowadays, traditional croquetas are filled with diced ham and béchamel and devoured around breakfast time. Eat them like a local on top of a saltine cracker with a squirt of lime juice. Here are the best 15 spots to find traditional and untraditional varieties.

Known in other parts of the country as a turnover, these flakey pastries are usually found in Miami filled with guava and cheese. Find the nine must-try versions here.

A Cuban espresso made with roasted coffee and a sugary, creamy concoction poured in.

A Venezuelan import, this hand-held item features a corn-based bread that can be filled with just about anything, though meats and cheeses are preferred. Best eaten late at night after bar hopping, so make sure to keep this guide handy.

The beloved jewel of the sea here in South Florida, these savory crustaceans are only available from October 15 to May 15 of each year. Best served cold with plenty of mustard sauce for dipping.

A region of south Miami-Dade county, this area is where most of Miami’s farms reside and where most of city’s local produce is grown — and some of the best milkshakes are made.

A Cuban sandwich, which is a local spin on a ham and cheese made with ham, roasted pork, Swiss cheese, pickles, mustard, and pressed inside Cuban bread. And don’t you dare suggest to put salami on it — that’s Tampa’s shtick.

A local fruit that is similar in size to a melon and has a unique flavor that can best be described as a very sweet baked sweet potato. It’s extra tasty in milkshake form.

The sister sandwich to the Cubano, it’s also filled with pork, ham, mustard, Swiss cheese, and dill pickles, but housed on a much sweeter, egg-based bread.

Miami’s most popular food personality and widely credited for bringing the farm-to-table movement to South Florida, he is involved in half a dozen restaurants (and counting) with his flagship Michael’s Genuine Food & Drink still going strong in the Miami Design District a decade plus after its opening.

The team behind The Broken Shaker and half of Miami’s cocktail menus. They helped grow Miami’s drink scene from laughable to internationally-recognized in a matter of a few years. 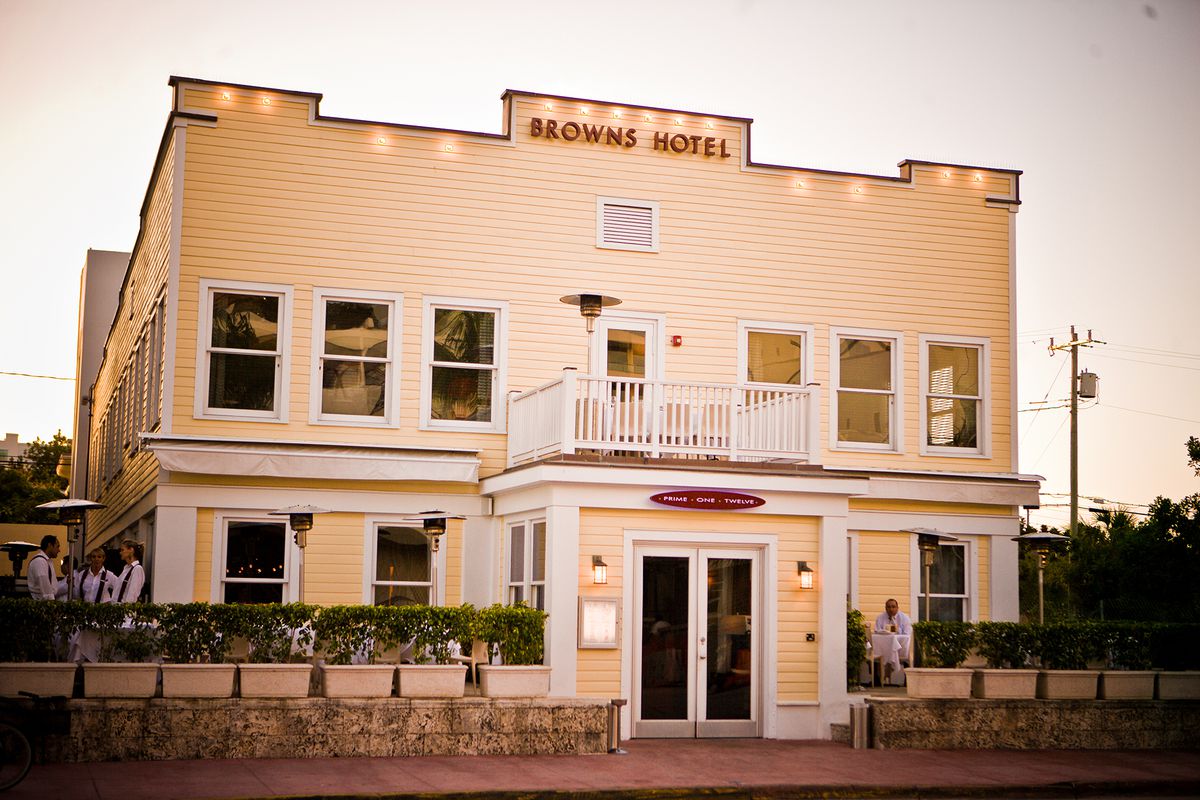 Carbone, Cote, Uchi, NAOE, Prime 112. But, unlike other major metropolitan cities, Miami is very much a last minute town — meaning with even some light planning ahead you’re likely to score a restaurant reservation anywhere you desire.

Eater Miami is updated multiple times every weekday with breaking news stories (restaurant openings, closings, etc.), features, guides and more. Here are a few ways to stay in the loop:

Have questions not answered here? Want to send in a tip or a complaint or just say hello? Here are some ways to get in touch with the Eater Miami staff:

Boy Bitten by Shark Gets Special Visit to Miami Seaquarium