Courtesy of the Miami Design Districtshareshare

The facades include a wall made of recycled cars, a wall of traffic barriers that have been converted into screens, a mural with cartoon characters mixed with baroque details, a corner design made of interlocking puzzle pieces and facade sections that serve as an “ant farm” and are exposed the activity inside and a painting of a candle burned on both ends.

The garage is due for completion this year and will serve as a seven-story mixed-use building with retail outlets on the ground floor and an 800-vehicle garage.

After the break, learn more about the individual facade designs.

New York City-based WORKac designed three-foot-deep rooms for its facade with a variety of programs, including a playground, library, and pop-up art room. The indoor and outdoor experience is exploited and the everyday activity of walking past the building becomes an unexpected social interaction. It was called the “ant farm”.

Berlin-based designer J. Mayer H. created a series of interlocking volumes entitled XOX. These volumes are painted with strips of automotive paint and contain embedded lights. It connects to the ends of the garage’s facades and acts as a puzzle.

Murcia and Miami-based Clavel Arquitectos has launched a project inspired by the growth of urban life in Miami. Their facade, titled “Urban Jam”, will recycle 45 old car bodies that have been coated with silver and gold. The result is a sculpture of cars trapped in a “surreal vertical traffic jam”.

Nicolas Buffe from Tokyo and Paris designed Serious Play, which includes entertainment in the program of a park structure. Inspired by platform video games, a unique series of cartoon characters in combination with baroque ornaments convey a humanistic idea of ​​”serio ludere” or serious play.

K / R Architects from New York and Miami use reflective traffic barriers that have been turned right side up to create colorful screens for their “Barricades” facade. Luminaires are distributed between the barriers, both of which illuminate the facade at night and turn on their axes in the wind. 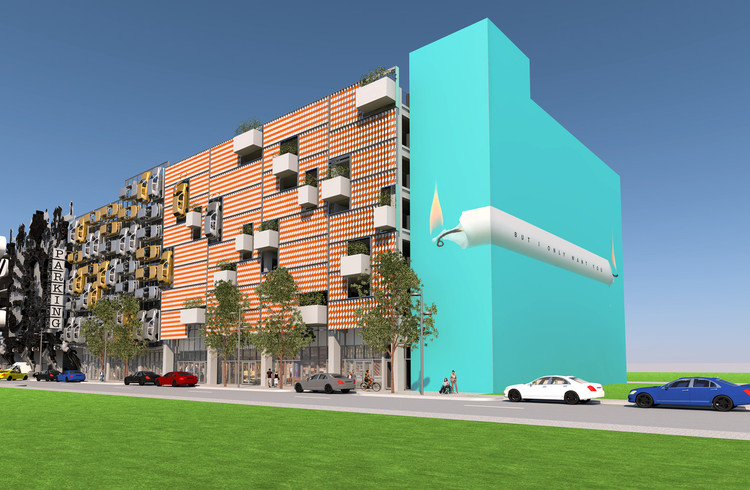 Courtesy of the Miami Design District

New York-based designers Sagmeister & Walsh created But I Only Want You, a mural with a candle burning at both ends. It can be seen as a message to live life to the fullest, or as love that burns but is destined to come to an end.