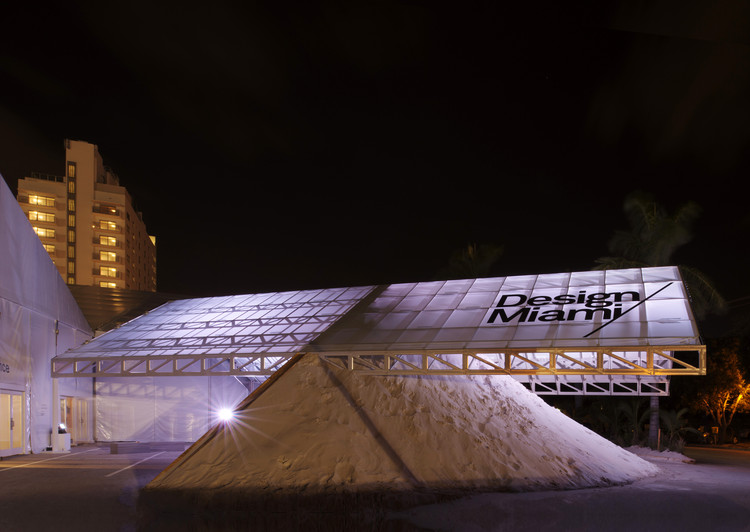 From the architects. Formlessfinders Tent Stack brings an intense architectural intervention to Design Miami /, inventing a new building typology that provides shade, seating, cool air and a space for the city’s public to play. The design practice, which was co-founded in 2010 by Julian Rose and Garrett Ricciardi, deals with new projects that are interested in the specifics of geography. The spatial, social and physical conditions of the place with which their structure will interact are carefully examined. They prioritize the use of available materials and commit to using them so that they can be reused. This approach leads to what they call “architecture that can go from nothing to something and back again”.

Find out more after the break … 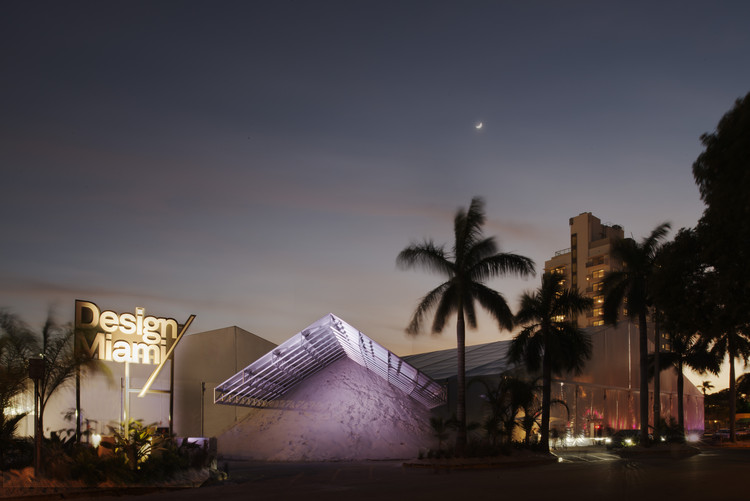 In searching for ideas for this project, Rose and Ricciardi ultimately focused on two phenomena that are very specific to Miami. The first was the ubiquity of sand in the region; The same material that made the city’s beaches famous also lies beneath the foundations of their buildings. 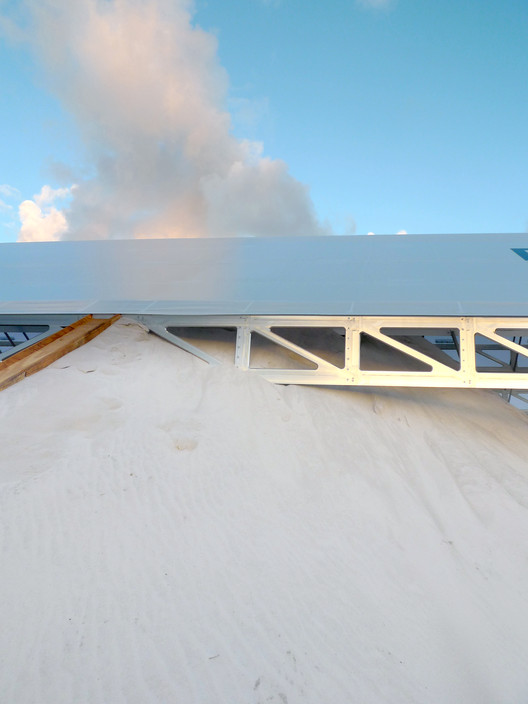 Any type of construction in Miami must take into account the loose and shifting layer on which the final structure will ultimately float. This state of affairs remains hidden beneath the surface of most Miami architectures, but Formlessfinder saw exciting possibilities in it: the weight of the sand could provide counterintuitive stability, and its looseness could offer new flexibility in terms of tectonics and construction, while the aesthetics of the material itself could gain in importance An iconic response in a region where neighborhoods and cities are named after local beaches. 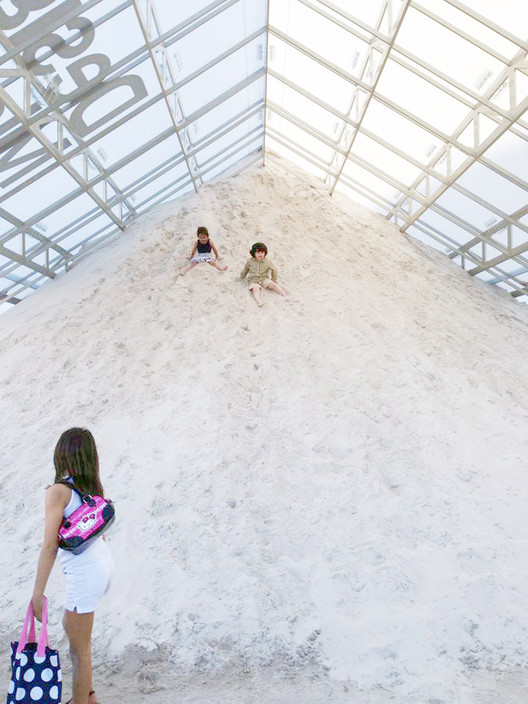 The second attribute of the city that Rose and Ricciardi noticed was its architectural vernacular. They were intrigued by a typology of public space that arose from the collision of a lush post-war modernity with Miami’s tropical climate: hybrid indoor / outdoor spaces protected by dramatic cantilevered roofs but not surrounded by walls, inviting passers-by to take refuge seek sun or rain, while at the same time free and fluid access to all is possible. 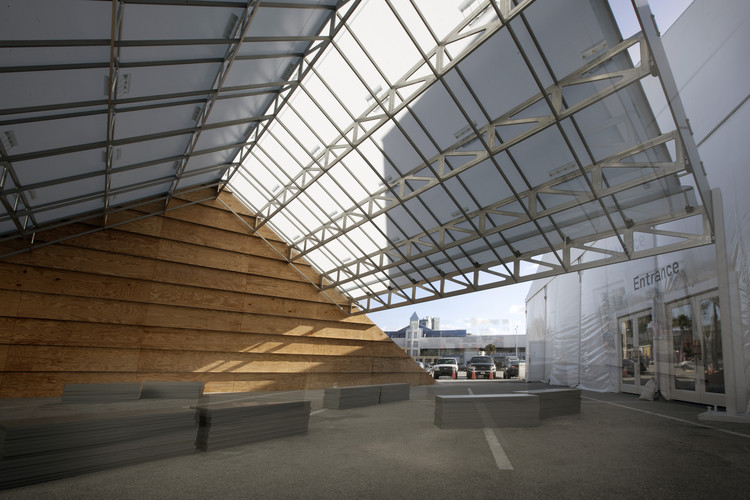 The challenge of mediating between the bulk and looseness of the sand and the lightness and precision of the boom was overcome through an innovative approach to structure and materials. The sand, so destabilizing to architectural projects in other parts of Miami, became the stabilizing element of Tent Pile, with a massive pile of the material – left loose and unchanged so it was completely reusable after its time on the site – as ballast acted to stabilize a lightweight aluminum roof instead of a traditional excavated foundation. 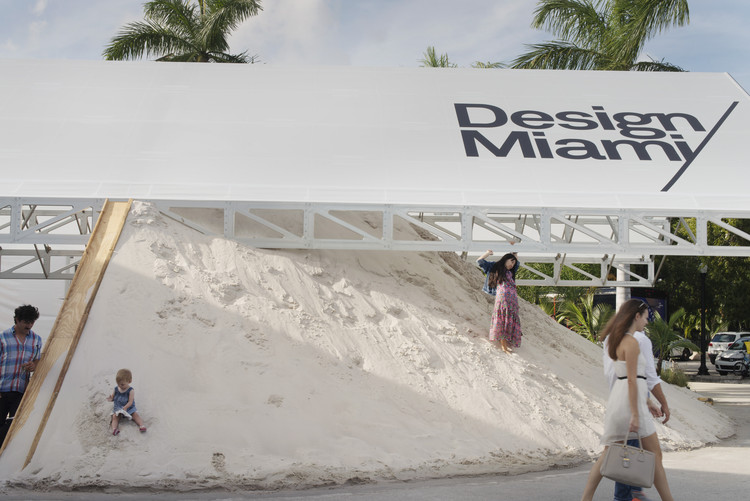 In order to increase the open space under the roof, Formlessfinder designed a retaining wall to cut the sand cone in half and create a more orderly space immediately in front of the exhibition entrance. Benches provide visitors with a place to relax, and the space is conditioned by a simple system that uses the thermal mass cooling effect of the huge pile – the steel structure that braces the retaining wall is embedded deep in the sand and in combination with a series of aluminum slats, protruding through the plywood surface of the wall, the cool temperatures of the interior of the stake are drawn into the seating area. 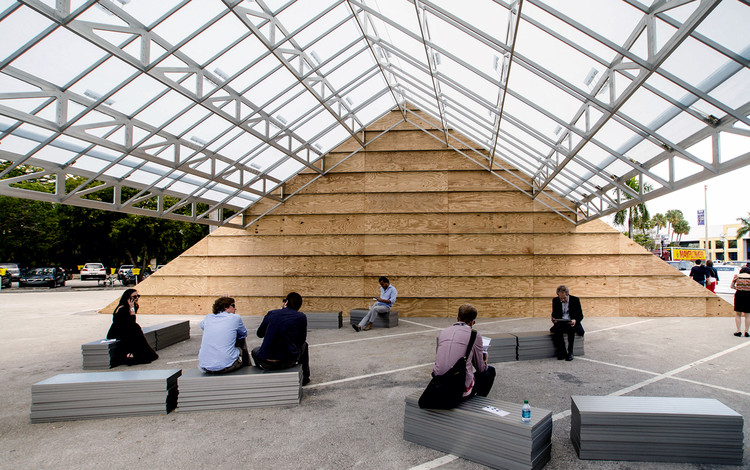 Tent Pile is a haven for the 50,000+ visitors who flock to Miami for the fairs each year, as well as residents of the South Beach neighborhood. It is conceived as a new type of public building that combines the practical requirements for accommodation and seating with a radical overhaul of the basic organization and functioning of the architecture.

Yet while Formlessfinder’s project pushes the boundaries of architecture itself, it remains literally based on materials and aesthetics specific to Miami and celebrates the location of the fair in the city – the sand pyramid is there to sit and play on, the fans can be started up, examined and enjoyed. “We hope to create something that people want to be a part of,” says Ricciardi. The result is a structure that can be designed and explored as admired.