Volunteer ministers are starting from the Church of Scientology in Miami to disinfect the Honduras consulate and provide them with Stay Well brochures for Miami’s Honduras community. 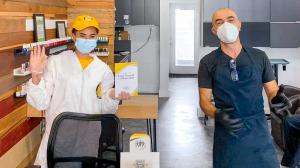 At a local nail salon, the owner was happy to take copies of the brochures and make them available to his customers.

Volunteer ministers placed thousands of Stay Well brochures in stores for customers to pick up copies for themselves and their friends and families. 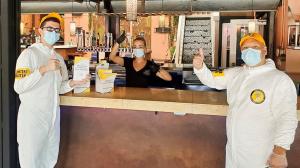 The stores appreciated the opportunity to be part of the solution to the pandemic by sharing this information with their customers.

The Church of Scientology in Miami is open with all protocols. All are invited to visit Scientology and learn more about it.

LOS ANGELES, CALIFORNIA, UNITED STATES, March 23, 2021 /EINPresswire.com/ – Miami is unique in many ways, especially when it comes to demographics: 70 percent of the population is Hispanic or Latino.

When the Church of Scientology in Miami realized that many, including those who had recently come to the city from across Latin America, were dependent on their consulates in times of need when the pandemic began, they turned to the diplomatic service with help Community.

On the Scientology website, an interactive timeline, 20/21: a look behind you and a look ahead, shows how the church launched a program of total readiness prior to the pandemic announcement.

In emergencies, the Church of Scientology works according to a maxim coined by L. Ron Hubbard: “An ounce of prevention is worth a ton of cure.”

The Church has compiled the most authoritative and effective guidelines for dealing with such an outbreak and has compiled them into a series of illustrated brochures written in simple, straightforward language that anyone can understand. Then volunteer ministers around the world ran an education campaign to help their communities understand how to stay healthy.

In Miami, where the Church routinely works closely with the city’s Latin American consulates to provide humanitarian and social improvement programs to their communities, one of the first priorities for volunteer ministers was to reach out to these officials. They disinfected consulates so they could be sure of providing personalized service to their communities. And they gave them copies of the Spanish Stay Well leaflets so that the consulate staff could make this information available to anyone who asked for help. The video shows their interaction with one of the many consulates they have assisted.

“This material is very important,” said Miami’s Honduran consul, describing the brochures. “This is a very articulated effort – an effort that requires a lot of commitment. And the information was compiled very systematically. A helping hand is really needed in times of crisis. “

The volunteer ministers also distributed thousands of copies of Stay Well brochures to key businesses, gas stations, stores and restaurants. They placed brochures in prominent locations in standees that invited customers to take as many as they wanted.

The Church of Scientology in Miami is open and welcomes the community to visit and learn more about how they can protect themselves and their families.

The church has served a growing congregation since 1957. The new home in North Coconut Grove on S. Dixie Highway 2220 was inaugurated in April 2017 by David Miscavige, ecclesiastical leader of the Scientology religion.

Miami Church is featured in an episode of Destination Scientology broadcast on DIRECTV 320, streamed on Scientology.tv, and available on satellite television, mobile apps, and the Roku, Amazon Fire and Apple TV platforms.


ONE Presswire’s priority is source transparency. We don’t allow obscure customers, and our editors try to be careful about weeding out false and misleading content. As a user, if you see something that we missed, make us aware of it. Your help is welcome. ONE Presswire, everyone’s internet news Presswire ™, seeks to define some of the boundaries that are reasonable in the world today. Please see our editorial guidelines for more information.